COVID QUARANTINE
Yep. It finally happened to us. After months of being super careful, the moment came when we were advised to get tested for COVID.

Elias had spiked a fever of 102.6 suddenly after his nap one afternoon and we were obviously concerned. He was displaying no other symptoms but my husband works a job where they are being EXTREMELY cautious about anyone with any symptoms at all so he called in and explained what was going on. They asked him questions about himself and me and concluded that in conjunction with Elias’ fever that his cough and congestion and my sore throat was enough to keep him from work until further notice and he would have to be tested.

I immediately called the pediatrician to rule out any other possibility – strep, ear infection, etc – and got an appointment lined up the same day. She checked his ears, swabbed him for strep and we waited. Nope and nope.

At this point she asked me if I wanted Elias tested and I explained our situation to her and she assured me that since he was displaying no other symptoms that even if he tested positive her recommended treatment and quarantine guidelines would not change so it was up to me to decided if I wanted him to have one. So we did. And he was NOT a happy camper.

He ended up testing negative but she informed me that there had been technical difficulties, his sample had sat for some time and she couldn’t say with 100% certainty that it was an accurate test. So then it was up to my husbands’ results.

After jumping through more hoops than I thought were necessary, given the current circumstances of the world he got an appointment for the next day. Mind you, this was the week of July 4th and the week before Elias’ birthday so I was peeved that we had to wait an extra day considering results take some time to come back.

We were told 3-5 business days for results. He took the test on a Tuesday and did not receive his results back until the following Tuesday. We missed 4th of July, we had to cancel our hair appointments that we desperately needed (my hair is the longest it has been since high school – PAST the top of my waistband) and had waited 8 weeks for and we almost had to cancel some house viewings. For what? A negative. As relieved as we were, we were also a bit frustrated that so much had gotten messed up.

COVID-19 ISOLATION UPDATES
In the past month we’ve been slowly allowing ourselves to be with some family again – we all understand and accept the risk involved. Why the change of heart? Because of just that – heart. We were some of the first people we knew to go into isolation – even before we were under governor’s orders to do so – and complete isolation is beginning to take its toll on all of us.

Jeremy and I could stay isolated forever as we’re both very much homebodies (in our dating days we would literally spend 8+ hours a day playing video games, watching movies and eating takeout 🙂 ) but Elias is clearly needing interaction with the people he knows and loves. He just turned two, he has no siblings and cats just do not cut it after a certain point. We have come to realize that we cannot keep him away from everyone indefinitely. He has a completely normal social need to be around other people that COVID-19 has taken from him and, like other toddlers, he is incapable of processing and coping with the stress. Simply put, his feels are just too big for his body. 😉

In addition to Elias’ social needs, we have needs too. We still have appointments to go to, we are still actively house shopping and we are also craving togetherness. We simply cannot haul Elias around to look at houses – we’ve tried and vowed never again – he HAS to have a babysitter. We started with our parents and have slowly started to integrate back in. Although we are a far way off from seeing everyone with no restrictions it’s been nice to be around other people for a change.

FOSTERING CATS
About four weeks ago my sister called me to tell me that she had been out walking down her road and she found a mother cat and her four kittens, all of whom had been dumped on the side of the road with nothing but an empty cup of water. I immediately got the cat carrier and headed down the road to meet her. We rounded them all up in about 10 minutes and I headed back home with some of the quietest cats I have ever transported in my life. Haha.

We quarantined them all in our bathroom where they devoured everything I fed them and drank all their water in about an hour; they were very clearly hungry and the mother was extremely dehydrated. Two of the kittens had swollen, draining eyes and we were aware they could all have worms, ticks, fleas and possibly other diseases so we kept them separated from our other two cats until we could get them to our vet.

The next day we got them to the vet where mama cat was given a rabies shot and a distemper vaccine; I was given medication for the kittens with eye infections and instructions that should any of the other kittens come down with infections to administer it to them as well. I also received dewormer and ear mite medication for all of them. I was told the kittens were only 6-7 weeks old and mama was still nursing. Dropped on the side of the road with a little cup of water. Unbelievable.

That night, after Elias went down, my husband and I settled into the bathroom for a kitty assembly line. We bathed (more like rinsed because we could not use our cat shampoo on a nursing cat or kittens under 12 weeks old) all the kittens and mama, gave them all their ear mite medication and dewormer; the kittens’ dewormer was in pre-filled feeding syringes which we had never done before so that was a learning experience. 😉 We applied the eye medication to the two with the infections and left them quarantined for the night.

By the next day, their eyes were looking better and they were all much more adventurous. It was recommended to us by the vet that we keep all them quarantined from our two cats for a week until the medications had time to work. Five cats in a small bathroom is hard enough; five cats in the ONLY bathroom with a shower that is between your bedroom and your toddlers’ bedroom is funny and frustrating at the same time. Multiple times we (or Elias) were woken up in the middle of the night from kitten shenanigans and trying to take a shower or bathe your son is next to impossible.

By the one week timeline we were more than ready to integrate the cats into the rest of the house but were unsure how other other cats would react so it was a very supervised activity. Alastor was curious and would go right up to mama and her kittens without any issue (except maybe reluctance, haha) but mama was NOT having that AT ALL. She would hiss, growl and move closer to him but she never once yowled or really went at him at all. The kittens could have cared less. Lestat, on the other hand, was petrified. He got one glimpse of one of the kittens and high tailed it to the basement. He did not come up for a week. HAHA. After that, mama cat did not seem to be bothered by Alastor and he didn’t seem to care at all; the kittens actively chased him around and he seemed to enjoy it, if not a bit agitated by so many little cats after him. 🙂 We were really surprised by both our cats’ reactions because Alastor immediately hissed and growled at Lestat when we brought him home and he still does some. We assumed Lestat would be the one running around with all the kittens because that’s what he did (and still does) with Alastor regardless of how Alastor treated him, but it seems he was scared of them. Cats are strange.

All in all it’s been a fun experience. Elias just beams when he sees all the “so cute” kitties and he constantly wants to hug and pet them. The kittens gallop through the house and are constantly jumping off and on the couch and tumbling around – I’m surprised we get anything done at all. My sister did end up taking the mama and one of the kittens, we kept two (let’s all welcome Pino and Shanks – yes, they are named after anime characters 😉 ) and the last kitten was given to someone we know. 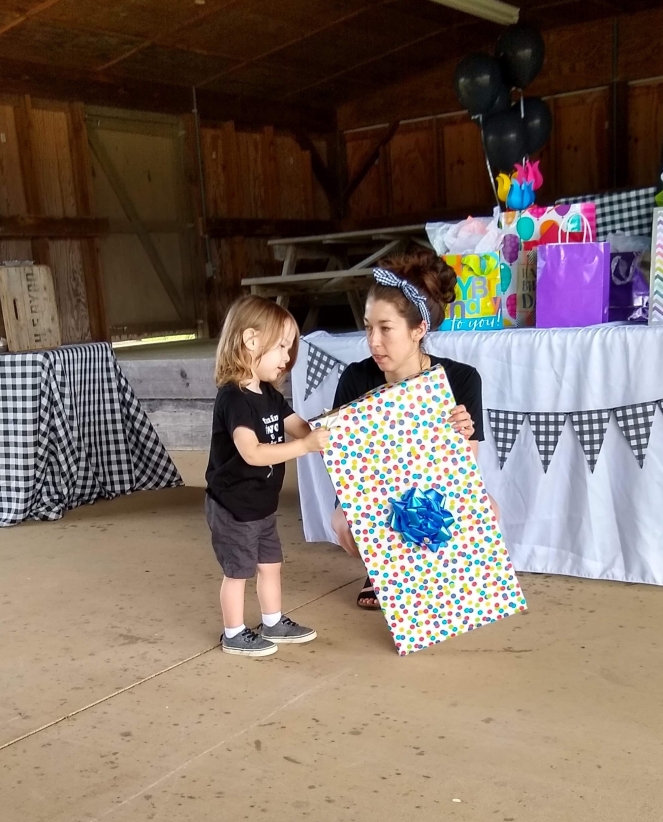 ELIAS’ BB2
We hosted a belated birthday/barbecue for Elias’ second birthday! Get it, BB2? 🙂

It was outside, we took some COVID precautions such as having hand sanitizer around, providing disposable food prep gloves for people to use before going through the buffet, encouraging people to bring and wear their masks at the party (we even had disposable ones available for people to use) and spreading out the tables so people had room to space out if they wanted or needed to. We ended up with maybe 30 guests and my best guess is that about 80% of people in attendance did wear masks with about 10% of people not wearing masks being small children. I was actually surprised and impressed by the response of people who 1) asked explicitly about wearing masks before coming and 2) the amount of people who chose to do so. We have some pretty hardcore anti maskers in our area (and family) but I was pleasantly surprised at the willingness of people to cooperate.

I plan on doing a more in depth party write up in the next week or so, so be sure to keep your eyes peeled!

THE GOOD, THE BAD AND THE STRESSED
Although we’ve had a lot of good come out of June and the beginning of July, I’ve been dealing with an immense amount of stress. Binge eating episodes, crazy intense mood swings and night after night of restless sleep, I’ve dealt with it all. Where is all my stress coming from? House hunting. The terrible twos. COVID isolation. Struggles with getting pregnant. The logistics of two adults, one toddler, four cats and a fish in a townhouse the size of a bean.

It’s all adding up.

It’s all adding up and it’s got nowhere to go and nothing better to do than to hang around my head and make me feel like crap. And act like crap. And clean crap. My life basically revolves around crap right now. (Speaking of crap can I just vent about how my adorable little kitten tracked little diarrhea paw prints all over my white duvet…after I washed it…twice…in a week?! )

Stress is my life right now. 😐